The unforgettable love story that began with three novellas is completed in the final, full length novel of the Sweet Lenora series.   Sweet Auralie follows Anton and Lenora through the trials and tribulations that mark the next part of their journey. Over the course of ten years, they travel to Shanghai as they search for a long lost child, to New England where they confront Lenora's scheming relatives to gain a fair share of Brewer Brothers, and finally aboard the Sweet Auralie on an adventure filled voyage where they hope to break the speed record and make the ship they've build the fastest ever to sail from New England around the horn of South America to San Francisco.

As Anton and Lenora strengthen and thrive as individuals, the love they share becomes the cornerstone of a great family and a legacy that will be long remembered.

REVIEW
"This is a story about what a couple of strong people who accommodate and bend to each other’s demands through love and profound respect can achieve. I’ve seen it in real life – but here someone has embodied it in fiction. Superb." - ​ Gary Bonn, Author of Expect Civilian Casualties


“I have something to tell you.” She smiled gently and put my hand to her waist. “ I am again with child.”
I drew my hand back. “With child? How long have you known?”
“I suspected it on the day of the hanging. I wasn’t certain, I’m still not certain, but with everyday it becomes more evident that it is true.
I sat upon the bed, overcome with a mix of emotion. The thought of a child warmed me and yet this warmth was tormented. We were at sea, heading for a land where we neither spoke the language nor well understood the customs. Lenora had already lost a pregnancy, and this was hardly a place for a woman with child.
Then something else occurred to me and anger was added to this mix of feeling. “You had thought to wait until now to tell me?”
Lenora stared at me as though I lashed her with a whip. She took her gown off of the floor and put it on, then crossing her arms over her breasts she tried for an explanation. “I have not seen a doctor.  I have not shared the news with anyone. You must know I would tell you first.”
“A fortnight has passed since the hanging. And yet you waited until now.”
“ I hadn’t found the right time to tell you.”
I got up and pulled on my breaches and stood over her. “ You carry my child and think the time must be right?” I pulled my shirt on and made ready to go.
“Anton, don’t be angry. I was—you were so busy, hiring a crew, preparing the ship.  I did not want to add to your burden.”
“A child is no burden. Surely you know that. And your concealing it is no small matter.” I left her then. Let her think hard and long on what she had done.

ABOUT Ute Carbone
Ute Carbone is the author of 13 books and novellas, several of which have won awards. She lives in New Hampshire where she spends her days walking in the woods, drinking way too much coffee and dreaming up new stories. 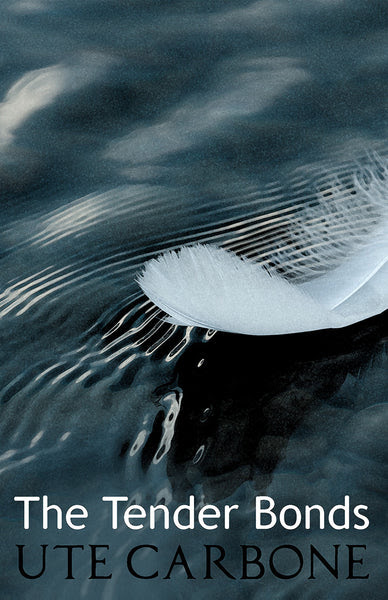 There comes a moment when the past we’ve left behind draws attention to itself and demands that we come to terms with it.  For Patty Dykstra, a woman who has long led an unassuming life, that moment comes after her aunt dies. Among a life’s worth of things,  Patty finds unopened cards from her father, a man that she hasn’t seen since she was six years old.

Patty is compelled to return to a small town in upstate New York to find the man who used to call her Star Shine, a man she barely remembers.  The Tender Bonds is the story of Patty’s life- altering journey, of the faith and hope that grow in the meanest of places, and of what it means to be truly home.

Sometimes the end is a new beginning

BUY LINK
What REVIEWERS Are Saying...
Patty’s life-changing journey isn’t a syrupy-sweet one, but the author paints it with sweet moments woven in and with brilliant imagery. At points, Carbone’s writing almost sings off of the page, in notes that range from discordant to melodious. 4 out of 4 stars - Online Book Club

Beautiful words, elegantly strung together, this is a wonderful example of writing from the heart reaching towards the hearts of even the most calloused readers.  - Tome Tender Book Reviews


EXCERPT
He played with the cupboard door before shutting it. “Lenore worked at the Fulton Elementary School. She was the school librarian.” I sat down. The light from the living room shadowed his face. “After…at the service. The teachers from the school and some of the kids and their parents, they came. They brought these balloons. A whole bunch of balloons. Judy, Lenore’s mother, said later that she didn’t like them. That they felt too celebratory and we’d just lost…but I thought they were beautiful. I remember when they released them, all these bright colors heading for the clouds. I remember hoping Lenore and the kids were like those balloons. That floating up to heaven was like that. I wished I could float away, just be unanchored. Just head out, unanchored.”

When he looked at me, his eyes drove a pin through my heart. He put his hand to my cheek, his fingers lingering light against my skin for a minute, and then he walked out. I heard his footsteps on the stairs, and I didn’t try to follow him.

I should have left. My head was telling me to go, an angry bee buzzing ‘get out, get out while you can.’ But my heart said otherwise. My heart, heavy as the darkness in that room, said ‘stay.’

ABOUT Ute Carbone
Award winning author Ute Carbone pronounces her first name Oohtah, but doesn't spell it that way. She lives with her husband in Southern NH, where she spends her days drinking coffee, eating chocolate, walking in the woods, and dreaming up stories. 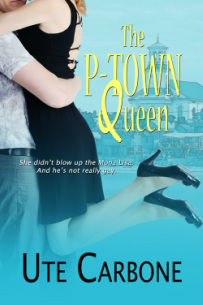 Nikki Silva thinks she’s blown up her life. Divorced, funding for her shark research cut off, she’s moved back to Provincetown to live with her father. Nikki’s written a grant proposal funded by a commission run by her ex-husband Ned, who would rather not give money to his ex-wife.

Marco Tornetti wants to turn Newark spaghetti joint into a trendy bistro. His silent partner, Fat Phil Lagosa, wants to use the place to solicit questionable business deals.  When Fat Phil turns on Marco and has him marked for a hit, Marco knows he’s in too deep.

Marco escapes the hit man and takes the first bus out of the city. Marco figures that Phil would never look for him in Provincetown’s gay community. But when he meets Nikki, he finds that pretending to be gay isn’t as easy as it would seem.
No comments: