BOOK SPOTLIGHT: A Marquis For All Seasons by #MFRWauthor Renee Reynolds @eenayray


The Marquis of Stafford laughed and the mirth returned to his eyes.  “I will likely regret this decision, but I have an idea.  Forces beyond our apparent control have decreed that you need a husband, and that I need a wife.  It seems we are perfectly suited to be the answer to each other's problem.”
Lady Miranda's eyes widened, her mouth gaping in shock.  This was not a topic she would have ever guessed for discussion between the two people most disinclined toward matrimony.  For certain, she misheard his words.  “Am I mistaken, or did you just make me an offer?” she rushed out in a gust of breath.  By the immediate look of surprise and dread mingling across his face, she knew she had indeed misunderstood.
“Good God, no!” he shouted before catching himself, looking around the room to see if he had been overheard.  He pushed her toward the door, and they exited into the dim sunshine of the partly cloudy day.  “I meant only that we could work together to help each other avoid marriage, since we are both desperate to do so.”
Miranda took in a deep breath, relieved, but also a little perturbed.  She would be a fine catch for any gentleman, and should not inspire such a look of utter affright.  “So . . . your actual proposal is thus: to avoid marriage, we must pretend an interest in each other.  It would be remiss of me, however, if I failed to point out, since we have shown no such inclinations previously, that hurdle will be difficult to overcome.”
“Perhaps with those who have been in our company of late, but not those who have been absent, such as a brother and sister recently returned from one month's rustication in Kent.”
Miranda's mind began to churn with thoughts and ideas of bringing this new plan into action.  She had to admit – but only to herself – it really was terribly well-conceived, and she did love to trick her brother whenever possible.  But it would take a deft touch to keep other friends and family from being suspicious.  She did so love a challenge!
“We must tread carefully, to prevent others from thinking our interests developed too soon, and also to prevent charges of caprice against ourselves when we eventually fall out of favor with each other.  We must 'kill two dogs with one stone.'”

ABOUT Renée Reynolds
Author Renée Reynolds grew up all over the world in a family whose motto is you can never learn too much, travel too much, or talk too much.  She owns an impressive stack of degrees that she ignores to instead write about what she cannot do: go back in time to dance at balls and flirt with lords and scoundrels.

Renée found her HEA in Texas, where she resides with the hubs, the kiddos, and a menagerie of pets. They've added to the family motto: you can never read too much, too often, or too late at night. 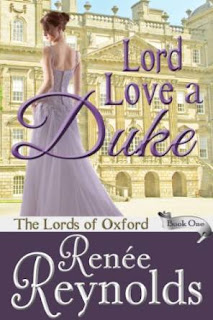 Jonas Leighton, Duke of Dorset, needs to find a husband for his spirited sister, Lady Miranda, before she drives him insane. His hastily organized house party causes her enlist the help of her best friend, Lady Juliet Quinn, to enact a series of pranks meant to distract the Duke . . . if only he would cooperate and be the victim.

Most complicating of all is the Duke's secret admiration for Lady Juliet, who is off limits in many ways; not only a friend to Miranda, she is also the sister of his close friend, Charles, Earl of Bristol. It doesn't help that Lady Juliet herself has vowed to avoid marriage, wanting no part of something based on convenience, money, or titles.

Everyone at the party seems to have their own plots and schemes, and the final prank yields the biggest surprise of all. Whatever is a duke to do?

EXCERPT
"Zounds!  Lady Juliet was stunning, thought Jonas as he climbed into the carriage to escape the hot summer sun.  She lay across the plush, navy velvet seat with one leg dropped to the floor, her tall, curvy form stretched out as much as possible in the close confines of the carriage.  Her hair was the color of rich, dark chocolate, piled high on her head with several tendrils escaping as she rested.  Long lashes lay against smooth cheeks that had pinkened slightly from the warmth of the day, their color matching her full pink lips.  He unconsciously stretched a hand toward her face to see if her skin was as soft as it seemed when she suddenly spoke.

""I know you are here.  I can hear you breathing.  Perchance do you have any treats to share?"" she asked drowsily without opening her eyes, the corner of her mouth quirked up in a half smile.  She raised and opened the fan that had been sitting across her stomach.  ""We picked the hottest day to travel, did we not?"" He watched as she delicately pulled her bodice away from her warm body to fan air down the top of her gown.  His mouth went dry and he suddenly felt it was much warmer in the carriage than without.  He struggled to swallow past a throat that was too dry.

""Indeed, Lady Juliet, it is rather warm for May, but we shall soon feel a cooling breeze off the Channel, I should think.""

Juliet's eyes flew open at the sound of his rich baritone voice and she scrambled to right herself in the seat, dropping her fan and shaking the carriage in her haste.  ""Saints and sinners, Your Grace, I thought you were Miranda.  You nearly scared me to death!""  He smiled and watched as she blushed furiously.

""Forgive me, my lady, but I sought the shade offered by the carriage while the horses were watered and rested.  Mama and Miranda are yet inside.""

""Yes, your sister had thought to find some lemonade or cider.  I think Her Grace was also anxious to stretch her legs.""  Juliet felt as if she were prattling but was too shaken to stop herself.  His stare was unnerving her, his blue eyes the color of the sea they would soon be near.  She felt her blush deepen as he continued to watch her.  It seemed the carriage had gotten smaller with the presence of his tall, muscular, and broad-shouldered frame taking up both space and air.

""Tell me, Lady Juliet, when did you grow up?” he could not prevent himself from asking.  “It seems the last I noticed you were a tomboy in pigtails, chasing frogs and causing mischief with my sister.""

She fluttered her lashes down in embarrassment, not realizing the alluring nature of her action.  Her lips turned up with a slight grimace.  ""You have been occupied with affairs of more import than your sister's friend as I have not worn pigtails nor chased frogs for some years now, Your Grace.  Miranda and I are of an age, which you well know, having been tormented by basically having two younger sisters each summer for the past fifteen years.""

""I think my true torment may have yet to begin,"" he murmured to himself."

ABOUT Renée Reynolds
Author Renée Reynolds grew up all over the world in a family whose motto is you can never learn too much, travel too much, or talk too much.  She owns an impressive stack of degrees that she ignores to instead write about what she cannot do: go back in time to dance at balls and flirt with lords and scoundrels.

Renée found her HEA in Texas, where she resides with the hubs, the kiddos, and a menagerie of pets. They've added to the family motto: you can never read too much, too often, or too late at night.