Trancing the Tiger on #Thursday13 with #MFRWauthor @Rachael Slate

MFRW Author Rachel Slate brings to our attention , on #Thursday13, Book 1 of her series


Rachael Slate resides on the West Coast of Canada with her husband and two children—or as she likes to call them, her own little blended world. One of the best parts about sharing in her husband’s Chinese-Malaysian culture is definitely the food—and the awesome celebrations!

Rachael writes stories that blend the lines between mythology, reality, and fantasy. In her worlds, you’ll encounter strong, sexy alpha males and the capable women who challenge them. And always, scorching hot romance. 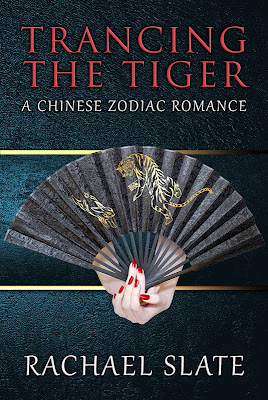 Blurb
Delve into a world steeped in tradition and superstition…
After her parents become infected with the Red Death, Lucy Yeoh flees to Malaysia seeking answers. Everything in this closed-off section of the world is paradise—from the lush tropical climate to her sexy new neighbor, Sheng…who just might be delusional. He claims the Plague God unleashed the Red Death and only a circle of Chinese Zodiac spirit animals can cleanse the Earth. Even more, he insists she’s one of them: the Rabbit. Long furry ears and fluffy bunny tail included.

He’ll show her how to fight to save the world… She’ll show him a love worth fighting the world to save…
Sheng’s enemies draw closer, and not everyone wants Lucy alive. Together, they’ll have to navigate a treacherous world where a line between duty and their hearts has been drawn between them. They must either sacrifice one, or find a way to surrender to both.
Buy link Amazon
www.rachaelslate.com

Rachael  shares 13 sentences from her novel:

“Sorry. My fingers are cold. Do you mind?” Her murmur against his ear spiked his blood.
Was she actually cold or did he detect a sultry note to her voice? Did she suffer the same raging attraction he did?
With his concentration on navigating the streets and his hands gripping the handlebars, she had him at a disadvantage against the fanning of her fingers.
Her warm fingers.
They rounded a corner, and her body crushed against his. She didn’t draw back, and the imprint of her full breasts branded his back. He swore he could even feel her tight little nipples rubbing against him. He fought the urge to swing around and take her on the motorcycle. To hell with crashing—as if they’d even notice.