Why did you decide to write romance?
I decided to write romance novels because I love romance. That's the truth. I love to read about couples who have married sixty years and then die holding hands. About the medieval couple they found buried, holding hands. I love to think about how much William of Normandy loved his wife and left her to rule his holdings in France. I love romance.

Since you write historical romance, tell us about your research.
My research involves primary source documents which are very limited for 1075. A lot has been written by academics about the period, though, so I use that information, too. It's just tough when academia suddenly decides to change it's perspective on an event. Such as the battle of Culloden. Really? The English weren't subjugating them? Okay.  I'll never buy that one. I understand the English (which I am very English) were powerful and that was their mindset - to conquer - but please don't try to convince me that in any way the Welsh, the Scots, the Irish somehow deserved it.

What do you do to relax?
I love music. All kinds. My favorite is good, live, celtic music. I love going to pubs and listening or participating in sessions. Sessions (open ones) are where musicians come together to share their love of the music. Various tunes get played that not all of them know, but they'll listen then join in. It's a great time. We have a lot of talent in the area. Musicians in Massachusetts and Connecticut. They all know each other and have played together. They may know nothing else about the other players, where they work or what they do for a living, but they'll remember the instruments they play or what tunes they know. It's great.

What about books? Who do you read?
Right now my favorite author is definitely Elizabeth Essex. Her writing is so fresh and exciting. I hate to stop reading but it's my reward when I'm on the tread mill so I have to be disciplined. It's hard. I just want to sit down and finish the whole thing. I know it's going to be satisfying.

What are the most important parts of romance?
The elements of a great romance start with a guy that is driven. He's hottest when he has interests that he feels strongly about: being a captain on a boat,  a knight in battle, a patriot fighting for freedom. Those are the guys heroines like best. It's a very sexy characteristic. I love romance. Everywhere. So the romance has to be good. The lead in. The dance around. The fulfillment. That's the best.

What does your writing schedule look like?
I have a set schedule that I try to stick to. I'm at my computer at 7 am but I work around my husband's schedule because I like spending time with him. I try to add to my WIP every day even if I have a lot of promoting or marketing to do. I also have to force myself to stop with the social media because it can suck you into that void and the next thing you know, hours have passed. Hours you can never get back.

What is the most difficult part of writing?
The hardest part of writing is the research because I love it so much. I could spend days and days going through primary sources and academic secondary sources. I just love it. Anything medieval. The more I learn, the better I feel about the time period. It's important to me that the reader not struggle with the facts. They shouldn't have to know all about The Norman Conquest in order to appreciate the story. I write romance not history but I do love learning.

Tell Us about your latest book.
My latest book is the second book in The Norman Conquest Series entitled The Gentle Knight. The hero is Peter of Normandy, who was introduced in The Saxon Bride. He's John's closest friend and he makes an appearance in the book as well. It's a medieval romance.

The story idea for The Saxon Bride came when I was spending time my sister. We were at the beach and she was telling me about this woman from her boyfriend's past that wouldn't let go. I had been playing around with the Conquest and found it fascinating. My hero was already a knight that had fought in the Battle of Hastings and even killed, inadvertantly, his wife's father. Talk about guilt. But the idea of a woman from his past that wouldn't back off came to me and I used the same name - Abigail! My sister and I pronounced like Seinfeld pronounced Newman. It was a lot of fun to create her. She may show herself again in book three. 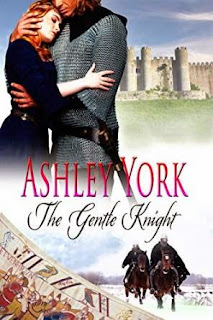 The Gentle Knight
Book Two of The Norman Conquest Series

A medieval soldier returns home to find his lover died in childbirth just as his own mother had. Believing he is cursed, Peter of Normandy turns from love. When he must give escort to an Irish princess more noble than many knights, he struggles with his decision to live a solitary life. Can he take the chance that his love won't be a death sentence and possibly make them stronger?

Padraig MacNaughton's death bed decree rips his daughter from the shelter of her protective clan in Ireland. Forced to take vows at a Priory in England, Brighit finds herself in the hands of lecherous mercenaries with their own agendas. Dare she trust the Norman knight to see her safely to her new life as a nun? Even when she finds in him the fulfillment of all she's ever wanted?

Or will honor and duty eclipse their one chance for happiness?

EXCERPT
""Do you have rooms for us?"" Peter's irritation intertwined with his unquenched desire.
""Yes, my lord."" The man bowed slightly then smiled. ""We have enough room in our outbuildings to accommodate a small army.""
He didn't have or need an army at the moment. What he needed was a willing woman.
Peter took another swallow of the warming liquid. He stood. The smoothness of his drink made a pleasant sweep through his body, down into his loins, and up into his head.
Brighit remained unmoving. Her head beside him, blurred slightly. He had the sudden urge to feel the softness of the brown hair that lay hidden beneath the stark white wimple. Run his hands through it. Slide his finger along her unyielding profile and tip her chin up ever so gently so he could meet her mouth for a warm, wet kiss—
Mort coughed loudly from across the table. ""You were saying, my lord?""
Mort's face appeared quite expectant but Peter wasn't sure what he had been sa—oh yes.
""Well, a warm bed or two would certainly suffice.""
The arousing picture of being in a warm bed with the even warmer body of Brighit beneath him flashed through his mind. Her lovely brown hair splayed across the pillows.

What is the most rewarding thing about being an author?
The most rewarding thing about being a writer is having an email from someone who read my book and liked it so much that they contacted me to tell me. That makes me cry every time. I'm so glad I took them to that place in our imaginations where we can get a break from life and pretend. We all need that.