A BOOK SPOTLIGHT Only For You @Sherry_Ewing #MFRWauthor

Amazon bestselling author Sherry Ewing presents the continuing saga of Katherine and Riorden de Deveraux from For All of Ever in: Only for You. 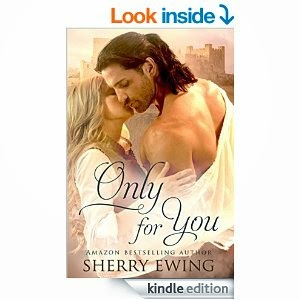 Katherine de Deveraux has it all or so she believes when she begins her life with her husband Riorden. But as she starts to settle into her duties at Warkworth Castle, she finds that an easy life is not only difficult but downright dangerous to her well-being.

Consumed with the haunting memories of his father, Riorden must deal with his sire’s widow who just happens to also be his ex-lover. Yet how could he know how far Marguerite is willing to go in order to have the life she feels they were meant to live?

Torn apart by circumstances neither Katherine nor Riorden could imagine, Time becomes their true enemy even while Marguerite continues her ploy to keep Riorden at her side. With all hope lost, will Katherine and Riorden find a way to save their marriage, or will Katherine be whisked back to where Time truly feels she belongs?

What Reviewers Are Saying...
"Another wonderful novel by Ms Ewing! One never knows what Time will do to a relationship. But in this novel, Time got it right. I was elated to see Jewels, Emily, and Brianna from her previous novel, For All Of Ever, return with all their feistiness, spunk,and charm. I laughed, I cried, and I cheered! And at the end I breathed a sigh of contentment believing in a happily ever after."

""Amazing. This author just keeps getting better. The story the presentation, the characters. I absolutely loved reading this and did not put it down until done. The only downside I can see on this author is the books are not coming fast enough! I do not believe in talking about the characters or the plot but I do believe in saying you will not be sorry for reading this!""


Katherine held the bed post and stroked the heavy wooden frame, almost reverently, as if to memorize the feel of it beneath her fingertips. Rough in places, it wouldn't always remain this way. She smiled in remembrance of the first time she had seen this room.
The chamber really hadn't altered all that much from now to when she was in Bamburgh with her friends more than eight hundred years in the future. Some of the furniture may have changed over time, but she still marveled that their placement was exactly the same centuries from now. She leaned her forehead on the dark oaken post and closed her eyes. She could still feel the utter despair of when she had first seen Riorden here in this chamber. She remembered reaching out to touch him, yet he had been nothing but a shadow of what could have been if only Time had not played such a horrible hoax on them.
The sharp sound of a trunk closing as the lid dropped into place brought her back to the present, and she watched in fascination as Riorden ran a hand through his mussed, shoulder length hair. He reached for a goblet of wine and took a sip until his attention immediately flew to her over the cup rim. There was such intense longing in his gaze that Katherine’s heart flipped, as it always did whenever he looked at her in such a manner. She knew he was reliving his own disquieting memories of her in his chamber as a ghost.
They continued to watch one another, transfixed by the haunting nightmare they had once shared. The image he presented, however, was so reminiscent of their past ghostlike encounter that a small thrill went through her, knowing he was really standing right before her in the flesh. She could touch him anytime she so wished, and forevermore would she be grateful that Time had bended to their most heartfelt desire. It wasn’t every day that fate brought her a gorgeous chivalrous knight to call her very own. She had waited her whole lifetime to find him, and she would take advantage of such a gift!
His eyes traversed up and down her body until a lazy grin developed on his face that generally was Katherine’s undoing. Since she could stand the handsome distraction he presented no longer, she shortened the space between them. Her eyes never left his as she came to stand before him. Taking the goblet from his hand, she took a small taste where his lips had but recently met the edge and placed the cup carefully on the table. The heady wine slid down her throat, warming her stomach. It was nothing compared to what he was unintentionally doing to her emotionally. The room grew hot, and yet still they spoke no words. He looked down at her from his towering height. His eyes told her what he wanted, but she only gave him a seductive smile.
She expected to be ensnared in his embrace and taken to their bed. He surprised her when instead he held his palm face up to her, and she knew for certain he, too, had been reliving the experience of their past encounter. With her shaking hand, she placed her own palm face down to hover but inches over his. She shivered when tingling sensations rushed up her entire arm. It was still there...that connection between them that even Time would never separate.
She could almost hear his thoughts. They mirrored her own.

ABOUT Sherry Ewing
Sherry Ewing is a self-published author who writes historical and time travel romances to awaken the soul one heart at a time. Her debut historical romance, If My Heart Could See You, hit Amazon’s top ten bestseller list for the eBook only two days after the paperback release. Always wanting to write a novel but busy raising her children, she finally took the plunge in 2008 and wrote her first Regency. She is a national and local member of Romance Writers of America since 2012 and is currently working on her next novel.