Borrowing the Doctor for a BOOK SPOTLIGHT with #MFRWauthor @VictoriaPinder 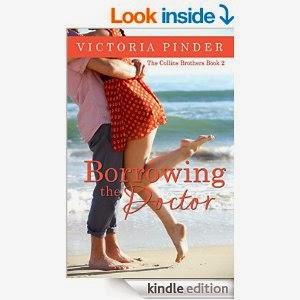 Party girl. Art thief. All around bad girl. It’s what all the newspapers call socialite and heiress Kate Sparrow. It’s all untrue. Kate’s been set up and she’s following the orders of the FBI to get the real criminal, her father. She’ll have to put up with her sister, the wedding fiasco, and her own fears that someone is after her, trying to stop her to get what she needs to prove her innocence.

Doctor Daniel Collins joins his brothers on a cruise to the wedding of his young cousin. His cousin begs him to keep a close watch on the bride’s sister, Kate. He's to keep her from ruining the wedding.

Kate doesn’t trust Daniel's help in her life, but the man’s interference is blocking a few problems. She lets him. After all, he spent a few years in the military and having a friend like Daniel is nice. But when her fears become true, someone is after her, pretending to be in a relationship with the sexy doctor has its benefits. What she hadn’t planned was opening her heart to trusting him. But if she doesn’t open up, she’s going to lose out on far more than her life, she’d lose out on love.


Daniel slid into his seat and away from Eric, but his arms remained tense. His brothers wouldn’t like this plan. He didn’t like this plan. “I’m to babysit the spoiled rich princess and keep her away from the cops and the alcohol, this trip.”
He pressed his lips together. He expected his brothers to have an opinion, but silence greeted his ears.
All eyes went back to the door.
His collar grew warmer. Daniel glanced around to stare in the same direction. He assumed Kate Sparrow had stepped into the club.
His eyes scanned the room, and then the crowds parted. He had his first look. Time might have stopped, and he heard his own heartbeat. Brown hair with a bit of a curl, brown eyes, small frame, unusually large breasts for a woman her size, and an energy that took his breath away. He also noted that Kate’s eyes held a gleam, and Daniel’s mouth fell open. Kate Sparrow was the most beautiful woman he’d seen in a long while.
Beauty meant trouble. He turned back to his beer and refused to stare at her.
The pictures in the papers hadn’t done her justice at all. How did they turn that pretty woman into a viper with a camera? His mind raced. Did she have a Jekyll and Hyde personality that came out at night?

ABOUT Victoria Pinder
Victoria Pinder grew up in Irish Catholic Boston then moved to Miami. Eventually, found that writing is her passion.

She always wrote stories to entertain herself. Her parents are practical minded people demanding a job, but when she sat down to see what she enjoyed doing, writing became obvious.

The Zoastra Affair, Chaperoning Paris, Borrowing the Doctor, and Electing Love, Mything the Throne and Favorite Coffee, Favorite Crush will be published in 2014.

Now she is represented by Dawn Dowdle of Blue Ridge Literary Agency. Also she’s the Vice President for the Florida Romance Writers.