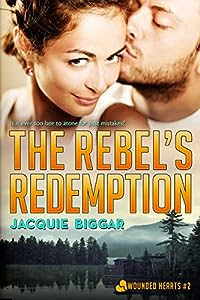 Annie Campbell has made a good life for her and her young son in the mountain town of Tidal Falls. She’s dating the sheriff, owns a successful business, and has the support of the community.

So why isn’t it quite enough?

Jared Martin left Tidal Falls a hotheaded youth, and now, after eight years in the military, he returns a bitter, disillusioned man.
Then he finds out he’s a father.

When an old enemy follows and causes mayhem in the small town, can Jared overcome the odds to protect the woman he’s always loved and the child he never knew, or will it be too late?

REVIEW
"This is book 2 in the Wounded Hearts series and it doesn't disappoint. Jared and Annie have a past; long time friends and a one night love affair. Jared took off to join the Nave SEALS the day after their union and 9 months later Annie delivered her son Chris.

Now 8 years later, Jared is back and learns he has a son and is still in love with Annie. Jared doesn't want to ruin her life however. But then trouble follows Jared to town and endangers the boy. Can they work together for the sake of their son? Will they work out as a couple as well? 2 Thumbs Up for a great book."  - Comment by Barb


“Miss Campbell, guess what? Jake’s here. He was outside when we went to get Susan. How cool is that?”
“That’s pretty cool all right. How’d he get here? And where’s Chris?” She’d grabbed up a napkin to wipe the ice cream from her lips, when a voice out of the past lifted the hairs on the nape of her neck and sent a shiver down her spine.
“He’s here. With me.”
The smooth tones rolled over her, and sucked all the air out of the room. Annie stiffened, then crumpled the napkin and slowly turned in her seat—yep, it was Jared all right. And Chris.
Oh.
My.
God.
He looked good. The random thought floated through her mind even as she tried to digest the fact he was finally back. Eight years too late, but he was here. She wanted to grab Chris and run. Run before what was obvious to her became obvious to everyone else. Shit.
“Hello, Annie, it’s been a long time.” Why was he looking at her as if she’d betrayed him? She wasn’t the one to cut and run without a single word in all this time. Goddamn him.
“Jared. Yes, it has been. A very long time. There were no phones where you were? Your mother probably would’ve appreciated knowing whether you were dead or alive.” Not to mention herself. She’d promised herself she wasn’t going down this road, the blame road. It was time to leave.
She turned her back on him, looked into Jack’s concerned eyes, and forced herself to smile as if her heart wasn’t shattering into a million tiny pieces. “I better get back. Tina needs to take her break. Call me later?”
He gave her waist a warm squeeze, and placed a gentle kiss on her cheek before sliding free. “I’m not sure what’s going on, but for what it’s worth, I’ve got your back.”
Near tears, she stood from the table, and without looking at either man again, grabbed both children’s hands and hustled them out the door.

ABOUT Jacquie Biggar
Jacquie lives in paradise along the west coast of Canada with her her husband, daughter, and grandson. Loves reading, writing, and flower gardening. Spoils her German shepherd, Annie and calico cat, Harley. And can't function without coffee.