A View to a Nerd #Thursday13 Sentences from #MFRWauthor @ChrisRedding

MFRW Author Chris Redding shares her book on Thursday Thirteen.
Chris Redding lives in New Jersey with her husband, two kids, one dog and two show rabbits.  She graduated from Penn State with a degree in Journalism and is still a diehard Nittany Lions fan.  Her books are filled with romance, suspense and thrills.  When she isn’t writing, she works for a local winery.

13 Sentences from A View to a Nerd 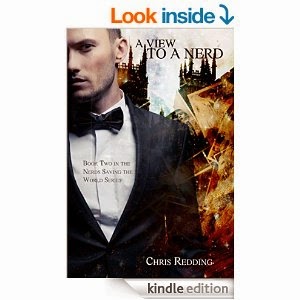 ""Joe and I were friends when we were both going through some tough times. I met his father briefly at Joe's house. I wouldn't have thought he would remember me or my friendship with his son.""
Bob looked her over. ""In that dress, a blind man would remember you.""
She playfully punched his arm. ""I was celebrating my divorce last night. I wanted to look good for me, no one else.""
Two uniformed officers passed and she noticed Bob glaring at them. ""Well, other people agree you look good for them. Here's an officer to take you to the hospital.""
""Thanks, Bob. Do the reporters know my name yet?""
""No, we haven't told them we've questioned anyone."" He put a hand on Miriam's shoulder. ""I realize you probably don't want to go through the wringer again."" She noted he left off the ""like when Mark was indicted"".

A View to a Nerd
Waking up next to a dead guy can ruin your whole day. When a wise-cracking interior decorator wants to put her past behind her, the dead body of the mayor’s son makes it pretty clear that won’t happen too easily. A conservative former computer geek for the FBI is holding on too tightly to his past. His wife died under suspicious circumstances and he believes the decorator has the information to solve the case. Unfortunately for him, she isn’t talking… until a series of events convinces her she needs protection especially when her biggest secret threatens to destroy both their lives.

This is book two in the Nerds Saving the World Series. Originally published as A View to a Kilt.