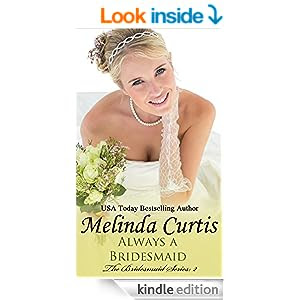 Nicole Edwards has walked down the aisle as a bridesmaid thirteen times! Thirteen times! In an effort to change her luck, this master baker plans to give up waiting for Jake – who doesn’t know she’s alive – sell her business in New York City, buy a food truck in Los Angeles, and find her own happily ever after.

Chef Sean O’Malley could use Nicole’s dessert skills at his restaurant in New York City. In fact, he’s banking on a joint venture with Nicole, although he hasn’t yet approached her about it. When he learns during a pre-wedding event they’re both working that she’s moving to L.A. because she’s giving up on Jake, he decides to give her a crash course on how to be noticed. Sean has, after all, three younger sisters. He knows how a woman’s mind works. But he doesn’t factor in how his heart works or how easily it could be broken.

EXCERPT
“You’re late,” Sean grumbled. “You should be prepping your dessert.”
“I have plenty of extra time.” Words tripped easily off her tongue. “Recall that I don’t work for you, Chef. As a courtesy, I sent you a text message when I left Vegas.” The closest major airport, a good three hours away.
Sean made a derogatory sound, and reached for a clove of garlic. His movements were culinary poetry, contained power and crisp execution.
What woman wouldn’t experience a heart-stopping ka-thunk while watching him? Nicole had a fantasy about Sean involving his ability to slice and dice. Flowers, that is. She imagined him visiting a garden, divesting it of blooms, and spreading them over a bed around her. It was a foolish notion given it was about Chef High & Mighty, but it was one she’d been unable to shake.
When Tiff became engaged the first time, Nicole had only known Sean by reputation. She’d agreed to meet Tiff at the reception hall to check out the refrigeration units and there he was – gorgeous and smart, but gruff and grumpy – the antidote to the Siberian Curse. They’d argued over the appropriateness of the kitchen. As a master baker, Nicole had specific requirements that Sean didn’t share. She preferred equipment that was top of the line, not new and untested, but not too old either.
Her gaze drifted to Sean, noting the subtle lines that fanned out from his eyes. She’d never noticed those lines before. They didn’t make him look old. They made him seem…less Chef High & Mighty and more human.
Human? Must be a trick of the light. Nicole blinked and moved past him to the sink.
Garlic pressed, Sean reached for a sweet potato. He cut it with the quick, steady cadence of a marching band’s drummer. “Your text was a little…vague.”
“Vague?” Nicole washed her hands. The window over the sink offered a view of the Iron Gate Inn’s planked back porch, parking lot, and small winery. All were covered with three feet of softly sloping fresh snow. “I said I was leaving Vegas.”
The percussion session ended. Sean didn’t look up. His knife paused mid-air. “Do you have a new phone?”
“Yeah. How did you know?” She’d gotten a new phone just yesterday and was still in the love-hate phase, discovering – or not – how things worked.
“Check the message you sent me.” That holier-than-thou tone of his always hit her wrong, as if someone had put dough in a food processor on puree when it should have been hand-folded.
Nicole pulled out her phone, toggled to his message and read, “Doodles, I’m live in Vegas now. Are you making porn tonight?” She raised her phone to heaven, feeling her cheeks heat.