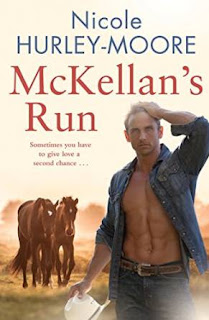 Violet Beckett once made the mistake of falling for the wrong McKellan brother. Now, eight years later, fate has brought Violet back to her home town with her daughter, Holly.

As soon as Violet runs into Charlie ‘Mac’ McKellan, she wonders if she should run all the way back to the city. But something about him makes her want to linger. Can she trust him, can she trust herself or will she be burned again?

Charlie McKellan has had a soft spot for Violet Beckett for longer than he can remember. It almost killed him to watch his brother woo her, use her and finally lose her. From his very first encounter with Violet he’s hooked. But how can he convince her that not all McKellans are the same?


‘I think we got a bit carried away.’
‘That’s okay. We can slow things down, whatever you want, I’ll do it,’ Mac said his arms still wound around her.
‘I’m not sure if this is such a good idea, Mac, I mean with our history…’
‘What history? Violet what the hell are you talking about?’
‘Okay fine, the history I have with your family, with your brother.’
‘I don’t give a damn about the past, Violet. Screw the history – I just want a future, with you,’ he said as he released her.
Violet felt bereft without his touch. Here she was trying to do the right thing, the noble thing and not let him sacrifice himself. Mac deserved so much more.
‘You don’t mean that Mac. You’re just trying to fix things like you always do. You want to protect me and Holly and I can’t tell you how much that means to me. No one has ever wanted to do that before. But I can’t let you; it wouldn’t be fair.’ She reached out to him.
Mac snatched his arm away. ‘Is that what you think?’ he asked. ‘After what just happened? You think I’m with you out of some sort of misguided duty?’
‘You’re a good man but I’ve said it before, I’m not your mistake or your problem.’
He pushed away from the fence and walked away without a look or a word.
‘Mac! Mac, please don’t leave like this. Please don’t just walk away.’
He whirled around and faced her crossing his arms in front of his chest as if he was putting a barrier between them.
‘Is that the way you want to play it? Damned if I know if you’re stubborn or just plain blind. Either way, I can’t talk to you right now.’
‘Mac.’
‘Just leave it, Violet. Before something is said that can’t be taken back,’ he said turning again and walking away his anger palpable and the air almost crackling with tension. The look in his eyes made it clear she’d hurt him. She’d never meant that to happen.
‘Mac!’
He didn’t answer or stop, he just kept walking, his back stiff and unyielding.

ABOUT Nicole Hurley-Moore
Nicole lives with her family in an Australian rural town in the Victorian Central Highlands. She's a full-time writer and a fan of happily-ever-afters.