#MFRWauthor BOOK SPOTLIGHT: Claudia and the Lords of Peterborough @AdamMannAuthor 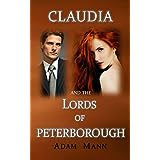 Claudia immediately fell when she met good-looking William, the heir to the Earl of Peterborough, but several months later began to regret her childless marriage, and his preference for fast cars and light aircraft.

After his death in a flying accident she had to review her position and responsibilities, and was just about to move on when William’s younger brother, Benjamin, comes back from a medical mission in Central Africa.

Ben is impressed with the more mature Claudia and suddenly she finds herself hooked again, but by this time Benjamin has inherited his father’s title, and if she marries him she will become the Countess!

Shire horses, Polo ponies, a Rottweiler puppy, and the Dowager Countess all contribute to make her decision easier.


Whilst this was happening the colt was looking at the Vet with a mixture of fear and suspicion, and when the Vet produced a syringe for the blood sample he actually snorted.  The Vet stroked the colt which helped to calm him, and Ted kept up a running commentary, which the colt appeared to listen to.
After another thirty minutes the Vet closed his bag, thanked Ted for his help, and left the farm.
Benjamin went to his bedroom to check on the door to Claudia’s room, with an oil can he borrowed from Ted’s workshop; he had been told that there was an Internet cable wired into each room, but he only checked his own room.  This wiring had obviously been done before the advent of wifi.  He borrowed a brush and a cleaning cloth from Alice in the kitchen, and made everything look neat and tidy.
Whilst he did that Claudia went to the stable block to estimate what needed to be done if they bought any new horses.  She made a list of jobs for Ted.

ABOUT Adam Mann
Adam Mann has lived and worked in Africa and Asia for many years.  He has always been fascinated by personal relationships, and in real life is now enjoying his fourth marriage, after being widowed, divorced, had one marriage annulled as this ‘wife’ had forgotten to get divorced.  Adam has extensive experience of social and sexual activities, which he brings into all his books in explicit detail.  Five of his published novels are based in Africa, seven in Asia, with six in Europe.  Adam now lives in a provincial city in a mountainous area of Vietnam.