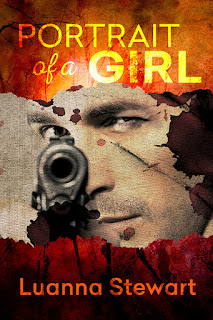 Portrait of a Girl
by Luanna Stewart
Entangled Publishing

Tony Simons is on the trail of an art theft cold case. He's hoping that by sticking close to Heather James—the daughter of his deceased prime suspect—he'll find the answers he needs. Instead, he's finding himself distracted by a gorgeous woman who drives him crazy in every way imaginable. Now Tony's in serious trouble. Even if Heather can't—or won't—tell him where the stolen paintings and money are, she may well have stolen his heart. And now someone wants her dead…


“What color would you choose, then?” She took a step closer, like she was angling for an argument. Arguing was not what he had in mind, either, unless it led to making up.
“I’d choose a blue like your eyes.” He closed the distance and tugged a lock of hair free from her ponytail.
“Or a mellow gold like your hair. Or”—he stroked her soft cheek, noting the catch in her breath—“the shade of your blush when you’re aroused.”
Her lips parted with a soft “oh.”
This right here was why he’d asked to be taken off the case or shipped overseas. He’d known, during that last meeting with his boss, that he was headed for this kind of trouble. The last thing he wanted to do was paint the fucking house.
She put her hand on the back of his neck and pulled him close, her soft lips laying claim to his mouth. He slid an arm around her waist, pulled her close, pressing against her heat. Her scent made him forget all the reasons why this was a bad idea.
“We shouldn’t be doing this.” She nibbled at his lips, playing and teasing.
“You’re right.” He nuzzled her neck, tempted to take a bite.
“I hardly know you.”
“Exactly.”
“Why are you so agreeable?”
“One of us has to think clearly, and I’m doing my damnedest to be a gentleman.”
“Maybe I don’t want a gentleman.”
She pulled him back for another kiss, openmouthed, tongues clashing. If the bad guys showed up right now—
He broke the kiss. They were both breathing hard, and her heart raced along with his. He had to get her out of his house. “I’ve got a deadline to meet, or I won’t get paid. I’d hate to make my landlord upset by being late with the rent.”
He felt her smile against his neck. “I happen to know your landlord, and her cat would go hungry if you were late with the rent.”
“I’d hate to be responsible for a cat going hungry. Maybe we can continue this discussion later.”
“You can count on it.”

ABOUT Luanna Stewart
Luanna Stewart has been creating adventures for her imaginary friends since childhood. As soon as she discovered her grandmother's stash of romance novels, all plots had to lead to a happily-ever-after.

Born and raised in Nova Scotia, Luanna now lives in Maine with her dear husband, two college boys and two cats. When she's not torturing her heroes and heroines, she’s in her kitchen baking something delicious.

Writing under the pen name Grace Hood, she has two novellas published with The Wild Rose Press. Now she is excited to have a book published under her own name with Entangled Publishing.