To Survive the Maelstrom on #Thursday13 with #MFRWauthor @BarbCaffrey

Barb Caffrey is a writer, editor, and musician from the Midwest who's written AN ELFY ON THE LOOSE and co-written "To Survive the Maelstrom," "On Westmount Station" and "A Dark and Stormy Night" (all with late husband Michael B. Caffrey). She's a huge baseball fan (Go, Brewers!), and hopes that one day, she'll be able to see the World Series in person. 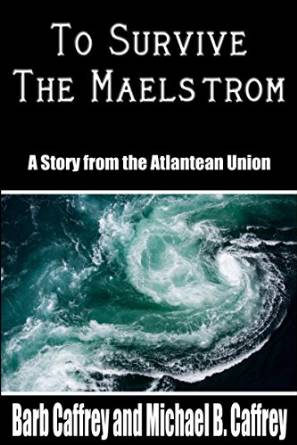 Publisher: Elfyverse.wordpress
Genre: Sci-Fi (military)
Authors: Barb Caffrey and Michael B. Caffrey
Blurb: Command Sergeant-Major Sir Peter Welmsley of the Atlantean Union has lost everything he holds dear. He wonders why he lived, when so many others died at Hunin — including his fiancée, Lydia, and his best friend Chet.
Into his life comes Grasshunter’s Cub, an empathic, sentient creature known to those on Heligoland as a “weremouse.”

Weremice are known for their ability to help their bond-mates. But how can this young weremouse find a way to bring Peter back from the brink of despair and start living again?

Barb shares 13 sentences from the novel:
He went to forage for some deadwood. As he bent down to gather the not-too-green wood, he scowled at his smooth skin, courtesy of a complete epidermal regeneration due to the severe burns he'd suffered at Hunin over most of his body. He grabbed the wood, taking it back to camp without the effort it would've taken him three weeks ago—three weeks in his own, subjective time, once he was out of the damned medically induced coma and could mark the passage of time again.

Not that he had any reason to mark time anymore, but . . . small favors.

As he continued to gather wood and mindlessly bring it back to camp, he bent, stretched and placed. Granted, it was nice not to hurt. But he'd liked his scars, no matter how strange the damned doctors found it. He was sixty-nine, not eighteen, and it was right that his body showed some wear. And he was tired of everyone—his friends, his family, his doctors—telling him to make the best of a very bad bargain.

Or worse, that he should be happy, when so many had died at Hunin.