It's a CRAZY STORM with #MFRWauthor @LiviaQuinn! 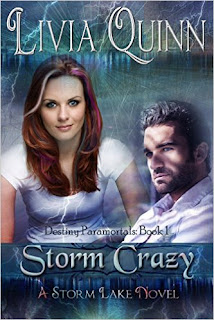 He’s looking for normal, but has he found Mayberry or Middle Earth?

To say I was having a bad day would be like saying Katrina dropped a little rain on the Gulf Coast. I’m Tempest Pomeroy, a mail carrier and Paramortal like my family. Or I’m supposed to be. If I didn’t have a few little talents, I’d think I was adopted.
I’ve denied my heritage for too long. Now, my mother’s out of pocket, my brother’s genie bottle is missing and the sheriff thinks I’m the cause of all the trouble. Hmm, he could be right.
Oh, and the sheriff? He thought he’d settled in a normal small town to raise his teenage daughter. Like Mayberry. Not…

Destiny, Louisiana is a place much like Mayberry— except for the Tempestaeries, Djnn, vamps and a few other... elements. Okay, to be honest, it’s more like Middle Earth.


Palm up, I concentrated, willing menori inside me to obey. Nothing. I squeezed my eyes shut, grit my teeth, and whispered hopefully, “Come to me.”
Blast! I sounded like a bad vamp movie. Separating my index finger, the one with the tiny tattoo-like image on the tip, away from my other fingers, I turned it up toward the darkening sky. The cells in my body began to vibrate. Like an energy solar panel, menori tapped the unstable air and focused it like a laser through the tattoo, accumulating until my head felt like it would explode.
The rumble beneath my feet was the only notice I had of the electric strike that rode straight up my legs, curling in my midsection and crawling swiftly along my right arm to produce my own version… of a Fourth of July sparkler, emanating out of that fingertip. Then the sparks changed. Brilliant bolts of crackling white light spit and sizzled in my palm, sending jagged streamers of acrid smelling blue fire ten feet into the air. I just gawked.
A car entering a nearby street freed me from the mesmerizing light display. This was different from any of the charging I’d previously experienced. Bigger. Usually it just sort of replenished on its own. Panicked, I looked over my shoulder, and exhaled. So far so good.
Now what? I needed to command the fire in my hand to... what? Before I could say, “Be gone,” or “Go thither,” the light subsided to a small crackly glow. So, that was it.
Instinct took over. I knelt by Mr. Jackson, placing my glowing index finger against his chest. With a single szzwaattt, I zapped him, right in the heart. His chest arched up only the barest of seconds as it met my magical defibrillator, then his body relaxed.
Momentarily deafened and somewhat addled as my faculties came back online, I groped for the pulse in his neck. For a second I thought I’d failed. But then, his tired, smoke glutted organ started beating. Thank the gods.
Only the slight whiff of burnt flesh remained on the wind. Drained of energy, I swiped my hand across my forehead. Then, I saw the mark.
“Zeus’ rechargeable bolts! That better be temporary.”
On his skin where I’d zapped him, a pale image was forming. It looked like a pale, mini version of… well… me.

ABOUT Livia Quinn
Livia Quinn is a D.C. native living in Louisiana. Livia's Storm Lake series was born after a layoff and a little known event in 2005 called Katrina. With several interruptions in her career involving weather, it’s only natural that storms would be at the center of many of her stories. She's a business owner, professional singer and salesperson; has been a plant manager, computer trainer, and mail lady.

She's written eight books based in the communities surrounding Storm Lake, an infamous, though fictional lake in Southern Louisiana, including Destiny, Larue, Thunderpoint, and Campbell Glen.