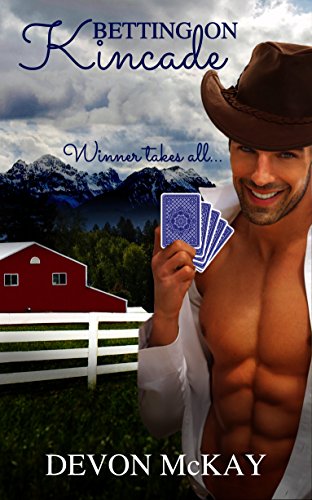 Betting On Kincade
Everyone Cassie Wilcox loved is gone. And now, thanks to her drunken stepfather, her house and family business will be taken from her, too, unless she can find a way to buy back the ranch from the new owner. With less than two months to come up with money she doesn’t have, her options are running out, and apparently, her common sense as she rents out rooms to an eclectic group of strangers.

Returning home for Dalton Kincade is bittersweet. Not a damn thing has changed. Two years on the rodeo circuit weren’t able to shake free the memory of the feisty redhead who’d broken his heart into a thousand pieces. Nor the sting of her parting words…Never trust a Kincade.

Winning her beloved ranch in a drunken bet is the last thing he expected to happen, but at least he saved it for her. Now, he has to figure out how to break that news to a woman who never wants to see him again. Renting a room in the house he now owns might be a risk, but it’s nothing compared to betting his heart on winning back the love of his life.

EXCERPT
“Are you going to play or just sit there?” Gary Evans slurred in drunken angst as he kicked back his chair and leaned over the table. Not waiting for a reply, he picked up the crisp piece of paper lodged between them, waved it in the air, and then, slammed the deed to the Wilcox land back down on the hard pressed wood.
Cautiously, Dalton stationed a deadly stare on the intoxicated fool and noted the shimmering of glee highlighting the steel gray of the man’s eyes. Tapping the top card, he slowly trailed his finger along the swirled red print.
He was a loser no matter the outcome. Should’ve just walked away. Ignored Gary’s foolish bet and the taunts that followed once the hook had been set. It wasn’t as if Cassie would appreciate his effort anyway. Regardless, he couldn’t walk away and let her lose it all.
Clenching his jaw, he folded his fingers around the squared edges and paused before picking up the pile.
“Read ‘em and weep,” Gary squealed gleefully as he tossed his cards next to the deed. “Four deuces.” He stumbled from the end of the table, closing the gap between them in one stride, before managing to shove a quadruple of stubby digits in front of Dalton’s face. “Four.”
Dalton studied his hand with guarded fury, then stifled the drunkard’s premature victory with a flick of his wrist.

BUY LINK!
ABOUT Devon McKay
Devon McKay writes contemporary romance with a western flair. If she's not writing, she's busy with chores on her small ranch, working on a stained glass project or walking one of her three dogs through the woods. Her greatest joy is putting a smile on a readers face and hearing from fans.