I’m an insomniac which is very helpful when you’re a writer. Once I get an idea in my head, I work out the plot and dialogue at night when it’s quiet. I don’t use an outline, but I do write down specific dialogue or scenes that I want to use in the book. I come up with a very definite idea of what I want each major character in the book to look like, then I go through magazines till I find a model, actor, actress, etc. that looks like them. I pin those pictures up on the wall labeled with my characters names in front of my laptop. I also do short character sketches of each character’s appearance, education, employment, habits, family, behavior traits, etc.


Every day I that I work on a particular chapter, I start my day by going back to the beginning of that chapter and reading and rewriting it where necessary, for clarity, to tighten dialogue, to add needed description, etc. When I finish the chapter, I go back and reread and rewrite it yet again. Then I give it to my husband to read and edit. After he’s done I read it again incorporating his corrections and suggestions and put it aside until the entire book is done. Then we both reread the whole book again for continuity and to make sure that the story isn’t bogging down in places. You need another pair or eyes, another person to read your work and catch your mistakes: formatting mistakes, typos, misspellings, redundancies, inconsistencies in the plot, characters, descriptions, obvious factual mistakes in your stories, etc. 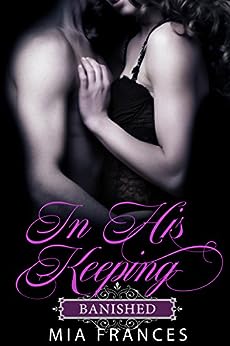 5.0 out of 5 starsGreat page turner!
By Carrie on December 15, 2015
Really thrilled with pace of this trilogy. I left book 1 (Taken) dying to know what would happen next. Banished (book 2 in the series) does not disappoint! The book picks up in NYC where Connor sent Sylvie to protect her from the killer. Mia Frances introduces a number of slimy characters who could all easily be the killer. I am dying to know who the killer is and if my suspicions are correct. The relationship between Sylvie and Connor continues to intrigue me -- Sylvie seems to struggle with her position in Connor's bedroom and Connor is starting to struggle with putting her in that position. Cant wait to see where Book 3 ends up!

EXCERPT
Sylvie was so busy dancing, she didn't see the crack in the sidewalk, and pitched forward onto the concrete, nearly falling on her face.  Whoops!  Guess she was drunker than she thought!  How many had she had?  She'd lost count.  She could only remember buying one drink: the first one.  After that, just like magic, every time she looked down there was another one in front of her.  Who knew she was so popular?  Must be the pushup bra she was wearing!  She looked down, smiling at her cleavage.  The girls might be little, but they looked mighty playful tonight!  Mustering her dignity, Sylvie got up on her knees, and struggled to her feet.  Standing up wasn't so easy when the world around you was spinning.  Where the hell was she anyway?  She scrunched up her eyes and tried to focus on the street sign.  She was on Park Avenue and 71st.  Almost home!  At least she thought she was almost home.  The building was big and white and had lots of windows and a whole bunch of trees on the roof.  It was around here someplace; she was almost sure of it.
She fiddled with her phone and typed in another title.  Suddenly the air was filled with the sound of Katy Perry singing ""Roar.""  Sylvie lurched and tottered, dancing from one side of the sidewalk to the other.  Then she bent over, squatted, and shook her ass in a slow, seductive grind.  She had a vague recollection of doing something similar earlier in the evening.  Except there had been someone behind her then.  She'd been dancing by herself when a guy, a stranger, came up behind her and began grinding himself against her bottom.  She'd never twerked before and wasn't sure whether she was the twerker or the twerkee.  She didn't really know what was happening until she felt his bulging erection pressing against her backside.  She had limited experience in this area.  The only erections she'd ever come in contact with were Connor's.  At least until tonight!  This was all new to her.  She didn't frequent clubs or bars, so she didn't know how to react at first.  Was this normal bar behavior?  Should she be flattered?  Outraged?  Deciding the guy was a dick and a sleaze ball, trying to take advantage of her and the situation, she stomped on his foot really hard and walked away without saying a word.