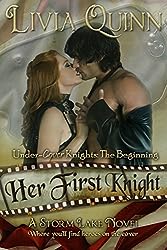 Ridge is an inventor, ex-Ranger, a billionaire CEO on a mission for veterans. So with the big vote on his bill coming up, how had he wound up on stage beside two cover models, with a hundred women shouting, “take it off”? That’s the question his friends and family would be asking tomorrow, if they found out. That, and “Who’s Tucker?” He’d just have to make sure no one found out about his little side trip. It could turn into his worst nightmare.

It had seemed like a recipe for harmless fun. A curious CEO on the way to his room follows a gorgeous redhead onto the wrong floor. Add a hundred romance writers and readers attending a conference. Toss in some false assumptions, throw out a lifetime of good behavior and Ridge was up to his Special Forces tattoo in manure.

REVIEWS
""There is a part near the end of this book that brought me to tears...I was sobbing. This book is dedicated to veterans and it's just a beautiful scene. If you haven't read it you'll know which one it is, if you have.... well you know what scene I'm talking about."" Amazon

""I really enjoyed this book. The characters were wonderful and the story was great. Most of all, it brings up the troubles that vets are having getting help from the VA for their ptsd and other medical problems. My dad was a proud WW11 vet til the day he passed and he had many problems getting help from the VA. I hope all of you that read this find a way to give a helping hand to our wounded warriors."" Amazon

PROCEEDS DONATED to the Wounded Warriors Charity between November 5-15, 2015.

EXCERPT
"Whether congress votes yes or no, we will move forward.”
“I’ve heard about some of the problems veterans face but didn’t realize the extent of it,” Buffy said, refilling his coffee.
“The burden on the VA is growing, with so many veterans between the ages of nineteen and twenty-five. With the agency’s recent problems, horror stories abound of vets dying or starving while waiting on diagnosis, care, or treatment. Many of them travel great distances to the nearest VA and face an overwhelming stream of paperwork, in addition to financial hardships on their families. Others end up on the street due to mental disorders or lack of appropriate care. It’s unacceptable.
“There's a vast disparity between what the government promises and what it can actually provide in terms of medical services and after care. Our consortium partners will also deal with other issues—housing, education, family support, even file paperwork, and provide transportation.”
“I’ve been talking to Sally Freeman, you remember her?” Buffy asked.
“Yes. The author with the WWP fund.”
“Sally told me women are more than twice as likely to have PTSD. And I didn’t realize that the majority of amputees were in the Army.” Like Ridge’s brother. “It seems overwhelming.”
“There’s a lot of need.” Ridge got up and poured himself another cup of coffee. He seemed unsettled suddenly. Buffy suspected the discussion brought the circumstances with his brother closer. “My concentration has been on prosthetics in the past, but replacing a limb isn’t the worst thing that can happen. These are the days of true bionics, where the replacement can add flexibility and advantages the human limb couldn’t.”
He looked out onto the backyard. “Even more important is the diagnosis of mental disorders so soldiers can be treated and find value in life again, and share in the support of their families. It’s the minimum they deserve. These are proud men and women who don’t like to have to ask for handouts or even treatment that’s due them. I want to see that end.”

ABOUT Livia Quinn
Livia Quinn grew up near DC—go Redskins!—then moved to the bayous of Louisiana—go Saints! Yes, she’s a huge football fan. With a life long fascination, read that: phobia of storms, and with severe weather a part of life in Louisiana, it was only natural that it would play a big part in her world. Livia’s Storm Lake series encompasses paranormal on the West end of the lake in Destiny and military romance and contemporary to the East in Larue and Thunder Point. But there’s always magic because what would life be without a little magic?

***All profits from the sale of HER FIRST KNIGHT from November 5 through the 15th will go toward wounded warrior charities. See the vets links page on my website.***