Even a wild heart can be broken… 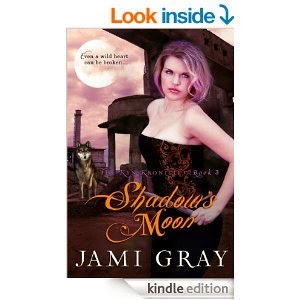 A blonde, a brunette and a monster walk into a bar and all hell breaks loose.

Tracker, Xander Cade, confronts an enraged Shifter in a crowded human nightclub, fraying the thin secrecy shielding the supernatural community from public scrutiny. Danger stalks the pack and she must protect her alpha and mate, Warrick Vidis, even if he doesn’t want it.

If they don’t find a way to trust each other and accept their rare bond they risk losing everything-their pack, their friends and each other.

Reviewers Say It All...
In Shadow’s Moon by Jami Gray, Xander Cade is the tracker for her werewolf pack in the Pacific Northwest. She is mated to the pack al- pha, but isn’t sure that she wants to be and hasn’t fully accepted the mating bond. As tracker for the pack, she is charged with discovering who is threatening both the pack and the alpha, a job that puts her own life in equal danger. I think Shadow’s Moon is an excellent addi- tion to the Kyn Kronicles series. It is nice to get reacquainted with old friends and meet new ones. Gray is really coming into her own. The book is very well written and the plot strong. I couldn’t put it down once I picked it up. It held my interest from beginning to end. – Taylor Jones, Reviewer (www.BlackOpalBooks.com)

Shadow’s Moon by Jami Gray is a fine addition to her popular Kyn Kronicles series. This book, unlike the first two, focuses on Xander Cade, rather than on Raine and Gavin. It’s nice to get an in depth view into characters like Xander and Warrick, both of whom we have met in the two previous books. Shadow’s Moon is riveting. I was caught up in it from the very first word, and I simply could not put it down. I read right through to the end, finishing at 4 in the morning. I can’t wait for the next one in the series. Gray has turned into a first class author of paranormal thrillers. – Regan Murphy, Reviewer


“Why are you running scared?” His question was stiff.
“Let me ask you something,” she said. When he gave a short nod, she continued. “Why did you bond us?”
“You were dying.” His voice was gruff, almost angry. “I—we need you.”
Need, not love. His choice of words scraped over her heart. “Need?” she asked around the tightness of her chest.
“If we lost you, the pack would be devastated.” “What about you, Warrick?” she whispered.
“An alpha can’t have a weakness, Xander,” he said, searing her with the brutal truth.
“So you consider a mate a weakness?” Oh, this was just getting better and better. Why had she thought she could make this relation- ship work?
“Did you forget what happened with Chavez?” he gritted out, rubbing the heel of his hand over his chest.
His movement had her realizing she was projecting her pain through their bond. Furious with herself, and with him, she reeled in her emotions. “Chavez’s mate was crazy.”
“He covered for her because he loved her, and now his pack is in upheaval.”
She wanted to punch him. The urge was so powerful, she had to curl her hands into the leather of her bike’s seat behind her. “So it’s not a mate that you consider a weakness, but the emotion behind it?” she pushed.
“No,” he growled. “You should never give an alpha wolf someone of his own.”
Confusion momentarily overrode her anger. “Why?”
His lips thinned and his jaw tightened. “An alpha is the ultimate protector. Protection of our packs is a natural directive. We will do whatever is needed to protect what is ours. Even if they don’t want to be protected.”
“Even a mate?” She kept her tone careful as she began to get an inkling as to why he was so damned determined to keep his heart out of her reach.
“To protect a mate some would burn the world,” Warrick answered. “Even at the expense of our pack. Chavez is proof of that.”
“Warrick—” she started.
He snarled and ran a hand through his hair in obvious frustration. “My wolf recognizes you as our mate.” Possessiveness stormed down their bond confirming his words.
Mate. A deep thrill hummed through her at his claim, but her heart ached because there was more to it. Dreading his answer, she asked, “And the man?”
“Is torn.” His face was grim. “Claiming you protects and strengthens the pack, but increases the danger to you.” His and me was left unsaid.
“You think you can claim me, but keep me at arm’s length? As if that will somehow keep me safe?”
He didn’t answer, but she could feel the belief in his screwed up logic. She and her wolf took exception to his assumption, and there was no stifling her growl. “I don’t need you to keep me safe, Warrick. I need you to accept me for who I am.”
Feminine fury rose and burned against his male arrogance. Her challenge was the last straw. She practically heard his control break. Swearing, he trapped her between his body and the bike before she could blink.
Being caged brought her wolf snarling to the forefront. Claws broke through and she swiped out, leaving thin bloody lines across one cheek before he captured her hands in his. He snarled back and took her lips with savage intensity. Ravaging her mouth, he took sharp bites of her lower lip before laving the stings with his tongue.

About Jami Gray
Jami Gray is the award winning, multi-published author of the Urban Fantasy series, The Kyn Kronicles, and the Paranormal Romantic Suspense series, PSY-IV Teams.  Her latest release, SHADOW’S MOON (5/14) was a Golden Claddaugh Finalist, and the first in her newest series, HUNTED BY THE PAST, hits shelves in July 2014. She is surrounded by Star Wars obsessed males and a male lab, who masquerades as a floor rug as she plays with the voices in her head.