LaVerne Thompson & Tenaj share 13 sentences from their new book that's part of the Hidden series, based on the collaboration of two authors. 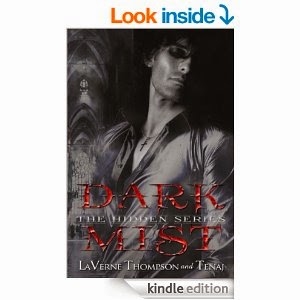 LaVerne Thompson is an award winning, best-selling, multi-published author, an avid reader and a writer of contemporary, fantasy, and sci/fi sensual romances. She also writes romantic suspense and new adult romance under the pen name Ursula Sinclair. She is currently working on several projects. Visit her at lavernethompson.com.

Tenaj is a pen name for the co-author of Dark Mist. This is her debut published work. She is also a storyteller at RP World Group, a free read/writers site where she’s taken part in several storylines. Visit her at fantasiavirtuoso.com.

Thirteen Sentences
Deacon, also known for a brief time in his long life as Diego Enrique Antonio Condes, stood at the open window, breathing in the scent of wet grass and cement drifting in on the dark night. He listened to the symphony of the wind as it battled to control the direction of the rain. His thoughts focused outward. He raised one finger and directed both of nature’s children to blow in another direction.

He won this round.

After a thousand years, he’d won many battles against the elements, he could control storms and lightning with but a thought. Almost as well, as he could control others, who sought to test his strength and challenge his rule. Although at times, it took more than a thought to stop some of them. Sometimes, it required their deaths, and he remained powerful enough to deliver.
This era seemed to be both a glorious and difficult time for the Hydden, as they chose to call themselves. He’d brought a kind of peace to his kind, a way for them to exist among humans without fear. Deacon smiled. Hidden in plain sight is what they were, in the heart of Memphis, among the thousands of churches with large exclusive and reclusive congregations.

Can he possess the unattainable?

For over a thousand years, Deacon has led his vampire brethren to live in peace amongst humans. But that was before he entered the dreams of the beautiful Rose, hungering desperately for that which he could not claim because the very laws he had set forbade it. Laws that meant certain death for the Hydden should they be broken...laws that Deacon himself might just shatter for one human. But he hungered for her blood and someone knew it.

Could he take what he desired most while still protecting himself from those who sought to destroy him? Or will Rose mourn the promise of an eternal forever if Deacon brings about his own demise?