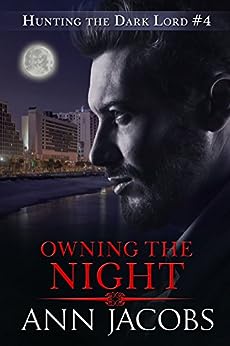 Alexandre has followed Reynard to the site of his latest killing spree, but before he can lay his trap and slay the sadistic vampire at last, he meets the gorgeous and alluring Mara. She is the first woman in centuries to reawaken his deep sensual nature, and Alexandre knows he must protect her from Reynard if he’s to have any hope of making her his for all eternity.

As Alexander indulges Mara’s every burning desire and seduces her with the promise of eternal vampire life, he must expose himself to draw Reynard into their final battle. But like all hunted creatures, Reynard is even more dangerous when he’s cornered, and Alexandre must destroy him before Reynard destroys Mara and any chance they have for eternal love. " Determined to honor the memory of her lost lover, Mara Leone has dedicated herself to tracking down the vicious vampire Louis Reynard. When the trail leads her to Alexandre d’Argent, Mara feels a hunger she hasn’t felt in years. Struggling to protect her heart even as she surrenders to the undeniable passion that flares between them, Mara must decide if she’s ready to let go of the past for a sensuously erotic future.


“Fuck.” The epithet slipped through Alex’s lips, a guttural cry that echoed against the heavy air that surrounded him. ""You’re certain?""

""Reynard landed right outside the gate to this deserted estate on Biscayne Bay and went inside. There’s only one way out, and I’ve been watching it. I swear he hasn’t gone anywhere unless he’s found a way to slip through stone walls. But since he’s been in Miami, three women have died. His work. I’m sure of it, though I don’t know how he gets in and out.""

Most vampires, Alex included, could move with stealth when circumstances demanded it. But Alex had been studying Louis Reynard since his pattern of serial killings began, and he’d never observed that the bastard could cloak his presence from fellow vampires—or that he could move through solid walls the way Alex and his clansmen could if they were sufficiently motivated. Still, the wily vampire had obviously managed to sneak out from under Philippe’s watchful eye. Three times so far.

It became more evident every time Alex encountered Reynard that while he might be old and battered, even for a vampire, he possessed an unequaled arsenal of powers. Alex shouldn’t have been surprised. After all, Louis had been honing his supernatural abilities for evil since centuries before Alex had been born.

What should I do? Philippe’s tone broadcast his frustration, a sentiment Alex echoed.

""It’s all right, my friend. I should be there very soon—assuming the winds don’t change direction."" Damn. He, Stefan and Claude shouldn’t have expected a made vampire, no matter how well Philippe was motivated, to be able to destroy Reynard or even keep him under surveillance once Reynard had sensed his presence.

They themselves had failed to end the serial killer’s life, and they’d been three against one. Alex let out another oath as he broke through the clouds and zeroed in on the bright lights of Florida’s Gold Coast.

No. Reynard still lived to wreak havoc on mortal women. And to horrify and terrify Alina, his cousin and the d’Argent clan’s beloved queen. Alex concentrated hard, cut through the damp air with a satisfying whoosh and sped toward his destination with hardened resolve.

This time he wouldn’t fail. Louis Reynard would die. And d’Argent honor would be restored.

ABOUT Ann Jacobs
Before settling down to raise a family and write stories about to-die-for Alpha heroes and the women who tame them, Ann Jacobs spent several years on staff of a national CPA firm and a few more as financial manager of hospitals and a health maintenance organization in west-central Florida. She began writing while her children were babies, making her first sale to the Berkley Publishing Group in 1996.

Almost twenty years and more than a hundred books and novellas later, she still lives in Tampa, Florida, with her own personal hero, her youngest son, a sometimes neglected orchid collection, and four very spoiled and much-loved cats.

Ann loves hearing from readers and tries to meet as many fans as possible at one or more conferences each year. You can learn more about Ann by visiting her website at annjacobs.net.