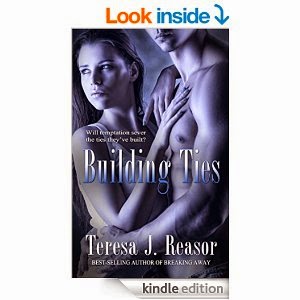 Blurb
Navy SEAL Brett 'Cutter' Weaver is on a mission to Nicaragua when he learns his bride-to-be, Tess Kelly, has been injured in a car bombing. At Homeland Security’s demand, he’s rushed home on the next available transport and arrives to find Tess embroiled in three controversial stories. One may offer the key to her attacker.

On top of the emotional and physical upheaval of the bombing, Tess has been offered the journalistic opportunity of a lifetime at the Washington Post. If she accepts the job, she and Brett face living on opposite sides of the country. With their wedding two weeks away, she has temptations to face and tough decisions to make.

Serving as her security detail, Brett sees Tess’s remarkable investigative reporting skills in action, and acts as her sounding board and partner. He’s willing to sacrifice to ensure her happiness, but more, he wants to keep her safe. Because there’s a killer stalking her, and one interview at a time, they mean to catch him.

What Reviewers Are Saying...
Teresa Reasor kept me captivated with this edge-of-your-seat romantic suspense.

We met these characters in the previous SEAL Team Heartbreakers series and their original love story was developed in Breaking Through. Reasor has amped up their relationship by throwing Tess into serious danger just weeks before their wedding in this story.

She has also introduced us to Brett's new SEAL team, and several new hunky men that we hope she decides they need their own story.

As a military wife, I love that Reasor has brought to this story the realism that military men (and women) are moved from one place/company/team to another where they must make new bonds and prove themselves worthy.


The phone rang on the nightstand across the bed from him. She started to turn toward it.
“Let it ring,” he urged.
Obnoxious and persistent, it rang again. “It may be the police officers in the building. They’ve been calling to check on me.”
He released her with a sigh. Her movements stiff, she rolled away from him to reach for it.
Whoever was on the other end of that line was officially at the top of his shit list.
He stared at the slender length of her back. Two nickel-sized spots of dried blood stained her white T-shirt at shoulder blade level. Fuck. While he listened to her end of the conversation, he struggled with the emotions the sight had triggered. Concern for her hit him in the solar plexus, then rage overtook it. When guilt kicked in, he ground his teeth. He should have been here for her.
She hung up and rolled back to him. “That was a detective I’d contacted before my car blew up. He’s been waiting his turn to interview me. He’s on the way here.”
“Of course he is,” Brett said dryly.
Tess laughed, then snuggled up to him. “We’ll make up for lost time later.”
He brushed her temple with his lips. “After I’ve put something on your back, Tess. You’re bleeding and your shirt has stuck to it.”
She sighed. “It’s just a little road rash.”
Brett drew back so he could look into her face. He smoothed her hair from her cheek. “How many times have you pampered me through little nicks and bruises since we’ve been together?”
“Nicks and bruises? Nicks and bruises? Jesus, Brett. It was a bullet hole.”
The indignation in her expression, triggered the urge to laugh and he bit his bottom lip to suppress it. If he laughed, she’d punch him. “It wasn’t exactly my fault I got shot, honey. I didn’t know Moussa was up on the cliff with a sniper’s rifle while we were surfing. We didn’t even know he was in the country until then.” He jerked the conversation back to the point he wanted to make. “What I’m getting at is, I want to be there for you, like you were for me. Isn’t that part of being a couple? Being married people?”
Her expression cleared and softened, her sherry brown eyes misting. “We’re not married yet.”
“That doesn’t mean we can’t practice the together ‘in sickness and in health’ part.” He leaned forward and kissed her, because in that moment she looked so freaking beautiful he couldn’t not kiss her. “You don’t have to hide your injuries from me. It only makes me feel like more of an asshole for not being here for you when you needed me.”
She ran her fingertips up and down his forearm in a comforting caress. “You wouldn’t have been able to do anything if you had been here.”
“Maybe not, but I’m here now, and you might as well use me.”
“Use you?” One perfectly arched auburn brow went up.
He couldn’t suppress a grin this time. “For whatever you need, honey, but I was thinking a body guard, driver, and corpsman.” He wiggled his brows. “And your own personal love machine.”
Tess laughed. She ran the fingers of one hand over his close-cropped hair, moved in and kissed him. “I never laugh as much with anyone as I do you. But that is one of the cheesiest things I’ve ever heard you say.”
“What about your, ‘I’ve handled your weapon, and now I want to touch your gun’ comment?”
Tess chuckled. “As I remember, you were all for having me handle your gun.”
“Yeah. Want to do it again?”
She dropped her gaze to his chest and ran a fingertip down between his pectoral muscles to the thin line of hair that bisected his abs. His muscles clenched in response and his cock stood at attention.
“I’ll even oil it if you want me to,” she breathed. “But you’re going to have to wait until after Detective Buckler has his interview.”
“Do you sense a theme happening here?” Brett asked. “Later, later, later.”
Tess laughed.

About Teresa J. Reasor
New York Times and USA Today bestselling author Teresa Reasor was born in Southeastern Kentucky, but grew up a Marine Corps brat. The love of reading instilled in her in Kindergarten at Parris Island, South Carolina made books her friends during the many transfers her father's military career entailed. The transition from reading to writing came easily to her and she penned her first book in second grade. But it wasn’t until 2007 that her first published work was released.

After twenty-one years as an Art Teacher and ten years as a part time College Instructor, she’s now retired and living her dream as a full time Writer.