#MFRWauthor Holiday Book: The Marquess and the Midwife: A #Christmas Novella @AlinaKField 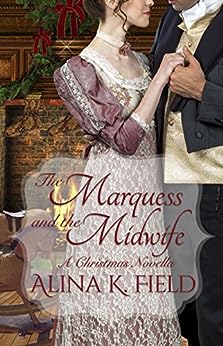 The Marquess and the Midwife
by MFRW Author Alina K. Field

Once upon a time, the younger brother of a marquess fell in love with his sister's companion. He was sent off to war, and she was just sent off, and they both landed in very different worlds.

Now Virgil Radcliffe has returned from his self-imposed exile on the Continent to take up his late brother's title and discover the whereabouts of the only woman he's ever loved.

Abandoned by her lover and dismissed by her employer, Ameline Dawes has found a respectable identity as a Waterloo widow, a new life as a midwife, and a safe, secure home for her twin girls.

Called to London at Christmas to attend her benefactress's lying-in, she finds herself confronted by an unexpected house guest--a man determined to woo her anew and win her again.

But, is loving the new Marquess of Wallingford a mistake Ameline cannot afford to repeat?

Buy Link
EXCERPT
She knelt before him on the sofa, yanked the shirt down his arms, and studied his chest. Small cuts marked his side and his belly, but the mottled scar was the worst. It would have taken months to fully heal a wound like this from the inside out.
Her vision blurred so she couldn’t see. But her hands, trained to examine a babe in the womb, they could see. She flattened her palms and set a course over the ridges knots, and hard ripples.
He surely had almost died. A world without Virgil, without his laughter, and his generally kind heart. He’d used her, true, as men did. It was in a man’s animal nature, wasn’t it? And she’d used him also, hadn’t she? Both of them grieving over his sister’s death, and comforting each other. And she was left with her girls, and things had turned out all right, hadn’t they?
Her hands cupped his shoulders and slipped over to his back. No scars there that she could feel. The ball, or saber, or…what else did men use to kill each other?…had not gone clean through. It had merely dredged a hole in his front and wreaked havoc inside him.
And nearly killed him.
She’d always pictured a wounded Virgil, binding up a minor slash and heading off to the Continent, maybe taking a wife there himself, and bringing her back to breed pretty, cheerful children. Virgil, rich, content and happy.
How she’d wallowed in that vision.
The feel of the scarred skin melted away her resentment. Let him have that happy life.
“Ameline.” Virgil’s breath touched her cheek.
Large hands cupped both of her hips.
Warmth spurted through her. Too late, she realized her error. She’d got too close again.
She pulled the sides of his shirt up, her gaze sliding over the rip and…
Right. He was fully erect.
Hot need shrieked inside her, and she battered it down and found her breath. “I apologize. My infernal curiosity.” She patted his shoulders and eased away.
His eyes had gone dark and feral, his lips parted like a hungry man ready to chomp down on a long-awaited meal. Inside, she melted more.
She took in a great breath. She must keep him talking. “How did the wound happen?” she asked.
His eyes shuttered and he yanked her hard against him, smashing his lips to hers.

ABOUT Alina K. Field
Award winning author Alina K. Field earned a Bachelor of Arts Degree in English and German literature, but her true passion is the much happier world of romance fiction. Though her roots are in the Midwestern U.S., after six very, very, very cold years in Chicago, she moved to Southern California and hasn’t looked back. She shares a midcentury home with her husband, her spunky, blonde, rescued terrier, and the blue-eyed cat who conned his way in for dinner one day and decided the food was too good to leave.