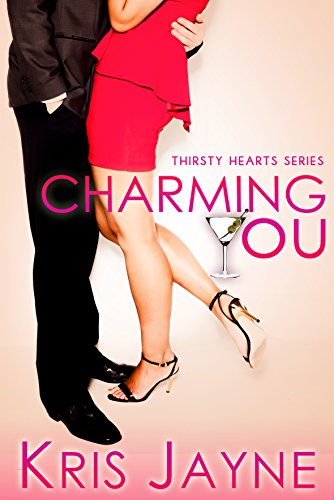 Micky Llewellyn has trusted men before—with disastrous results. Now, she’s focused on her career, her friends, and making sure she doesn’t let another charming man lie to her and break her heart.

Nick Halden’s life has unfolded according to plan—a career at a top law firm and an engagement to the perfect socialite (he hopes).

When fate throws them together, Nick’s charm makes Micky’s heart pound with desire and her gut twist with mistrust. Nick has one way to make sure he gets what he wants, but it means betraying the woman he craves. In their struggle to balance love and ambition, they have to decide what they want before they lose the one thing that matters." "Can she trust the charm of an ambitious man?

Micky Llewellyn lost her trust in men. Nick Halden has his life planned—a top law career and an engagement to the perfect socialite. Fate unites them, and they balance love and ambition to hold onto the one thing that matters.


"Don't you think it's kind of shitty to be having drinks with one woman while you're still engaged to another?""
""You looked upset in the elevator, and I thought it would be nice to have a friendly drink. We're going Dutch, remember? I can have female friends. What have we done that's inappropriate? Nothing.""
Micky had to admit that, for her, it wasn't nothing. And she doubted that the pull of attraction went one way. She contemplated grabbing her purse and stalking out of the bar.
""We've flirted,"" she admitted, which only served to amuse him further.
""Really? You seemed pretty pissed off the other night even though I'm not entirely sure why.""
""That's funny because the thing that pissed me off then has turned out to be true. You casually talked about being into all manners of women. So many women, so little time, I guess. Now you tell me that your called-off engagement might not be called-off. It makes me wonder if that's all some elaborate tale to keep me thinking you're available when you're not,"" Micky snapped, the control she had over her ire dissipating.
""Believe me, I'm not one to date more than one woman at a time. Most guys may say they want lots of women in their life, but trust me, I don't need the drama.""
""Women bring drama?""
""Not necessarily, but I've found that the level of crazy in a man's life rises exponentially with the number of women."" He sighed and started to speak again, but Micky cut him off.
""I see,"" she said, looking around the bar for the waiter.
""No, wait. I just mean that juggling women is a bad idea and a habit that I broke myself of a long time ago.""
""Have you? Because I don't care what you say. I've seen the way you look at me, and it is most definitely inappropriate if you're promised to someone else. Is it so hard to wrap up one relationship entirely before looking for your next conquest?""
The green in Nick's eyes deepened. He leaned over the table.""You're right. I'm attracted to you. I'd love nothing more than to drag you upstairs to one of the rooms in this hotel and strip those uptight business clothes off of you so that I can finally know what color your nipples are. And what they taste like."

ABOUT Kris Jayne
Kris is a devoted writer, reader, and traveler. She spends her days blissfully sweating out the writing process in the Dallas area with her dog, Otis the Shih Tzu (DNA verified after being told he was a Lhasa Apso).

Her passion for writing is only matched by her passion for the adventures of travel. In 2008, she let a friend talk her into sleeping outside for the first time in her life when she climbed Mount Kilimanjaro.