Meet #MFRWauthor @LoreleiConfer, An Uptown Girl and a Cowboy!

Meet MFRW Author Lorelei Confer.
Lorelei Confer lives on a peninsula in the mid west coast of Florida with her husband, two cats, and AJ, her long haired Chihuahua.

She wrote her first story in the fourth grade in the form of a play which actually was produced by her teacher for parents and students. She continued writing and majored in English in College. She practices every day to improve her craft.

I wrote my first story in the form of a play when I was in the fourth grade. The teacher liked it so much she produced it, using students as actors and invited all the parents to the assembly. It was something to do with fear of going to the doctor.

An author of romantic suspense she loves reading almost as much as writing. She has filled her book shelves with her favorites, i.e. Harlan Colban, Eliza March, Johanna Lindsey, Kathy Carmichael, Terri Garey, Karen Rose, LuAnn Rice, and Bobbi Smith just to mention a few, as well as all the classics.

A lot of my personality and my life experiences are in my writing, but not all. I've never been trafficked as a sex slave, or thrown off a cliff, left to die, or found a murdered body. The places I've visited many times such as Jackson Hole, WY are in my writings.

I was forced to retire early due to health issues and really thought a lot about my life and what might be in store for me in the future. I had ideas and dreams and bits of dreams that I had to get out of my head. I started writing them in one of my journals and soon after put something together resembling a good story. In 2006, I joined RWA and the local chapter of RWA, TARA, and from there knew the next step was submission. After many rejections, and with some tweaking I received a contract for the first series, The Deadly Series.

Tell Us How You Got The Idea For Your Most Recent Book.
An Uptown Girl and a Cowboy, the second in the Saddle Creek series, started with an idea about what happens to high school friends after high school. You have nothing in common anymore but do you remain friends? I thought about men in particular, they lose touch so easily and I came up with the idea about four grown men who each went their own way after high school: one went to college, one bought the horse ranch he worked at, one went into the military and one into police work; yet they reconnected as 'brothers' and all settled down in the shadows of the Grand Teton Mountains where they all grew up. This book is the story of the college grad, Elliott and Sam (Samantha). Elliott is an outfitter with a store of sports gear and a planned schedule of events, i.e. float rafting down the Snake River. He works in Jackson but lives outside in a small town of Saddle Creek. Rosie's Diner is in the center of town where he runs into Sam, an uptown girl from New York City all the way, a wanna be wildlife photographer. They hit it off but unknowingly trouble has followed her there. They both experience tremendous emotional strife before they find each other.

An Uptown Girl and a Cowboy 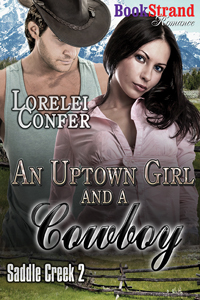 Samantha Williams, a New York City girl, wanna be photographer, stumbles into Rosie’s Diner in Saddle Creek, Wyoming, outside Jackson Hole. Disheveled from a horrid travel day, Sam finds the only seat available is at the counter beside a cowboy—a burly, staggeringly handsome, strong-muscled cowboy, who she is immediately attracted to and who has some baggage of his own.

Elliott Bouchard, an Outfitter and trainer of therapy horses, thinks he already found his one true love and buried her. He feels responsible for his wife’s death, until he meets Samantha Williams. He wants her for himself; to protect her, not only from the raw elements of the west but from someone following her who wants her gone.

After Sam’s life is threatened, due to murderous evidence she unknowingly has in a picture, Elliott comes to her rescue. But will he be there in time?

EXCERPTMad as hell, she stepped outside. She booted the car door hard. It closed, making a loud noise that echoed in the night quiet. Steam whistled out from beneath the hood and the front tires. She stepped back onto the road, expecting the vehicle to go up in flames at any minute. Walking to the rear of the vehicle, she kick-boxed the back tire.
Remembering her bags in the car, she quickly opened the passenger door and grabbed them, and then stepped away. “You wanted the wide, open spaces, girl,” she muttered. “This is all part of the journey, so deal with it.”
Twisting side to side, she looked up and down the road, but didn’t see another car coming either way. Damn it. She would have to walk. After all, it was only two miles to the nearest town. The sound of her heels on the asphalt sounded like gunshots as she headed toward the silhouette of the towering mountains looming in front of her. Her eyes, now adjusted to the dark, scanned the dim area. No buildings nearby, no lights at all. She shivered. The air, cooling off now since the sun had gone down, would only get colder. She longed for her heavy jacket she’d placed in one of her missing suitcases.
No stores in sight. So isolated. No barn or shed for shelter. No hotels, or motels, no open-all-night 7-Elevens, no gas stations, no shopping malls, no people, and no traffic to flag someone for help. How do people live out here?
She twisted her foot on a small rock on the road, kicking it aside, and heard a crack. She put her now heelless shoe onto the pavement, glanced down, and perused the damage. Moaning at her costly mistake of ruining a pair of expensive shoes, she reached to the ground and picked up the heel. She was reminded of the movie Romancing The Stone. She took off her other shoe and slammed it against the blacktop. Nothing! The damn heel would not come off.