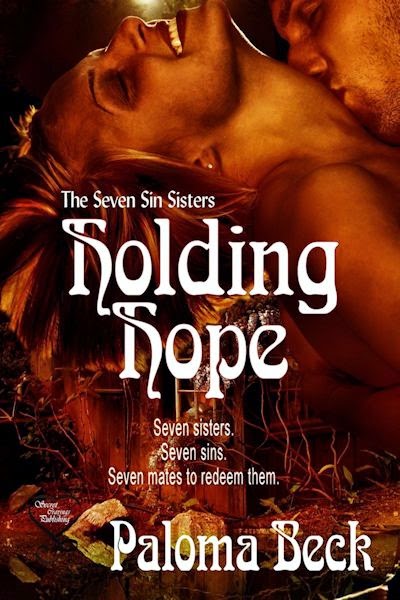 The seven Sinster sisters are entwined in a legacy originating back from the time of the Italian Wars in the 1500s. One by one, they’ll find their mates from the immortal Valendite Breeds and secure their place in history.

Lucas believed he was fated to live out a solitary existence. He devoted himself to the sole mission of protecting his family and his breed when the woman he thought to be his mate died right in front of his eyes. With only one fated mate, Lucas understood his life would be lived alone.

Until he held hope in his arms… Ella was a captive of his sworn enemy when he found her and immediately felt the connection. Lucas rescued her, nursed her back to health and cared for her. Now can he convince her to embrace her identity as one of the women of the Magdalena Circle? This might prove to me his most difficult mission yet.

This novella is recommended to be read as book 4.5 in the Seven Sin Sisters series.

EXCERPTLucas held the most precious thing in his arms, something he thought he’d never have in his many years. Once, just once before, had he allowed himself to hope but it hadn’t been meant to be. Martha had died before he could claim her but he’d been certain at the time that she was his mate. Could it be he was wrong? He’d lived years believing he’d lost his only chance at love, his one true mate. Now, holding Ella in his arms, Lucas understood Martha hadn’t been his mate after all. You couldn’t have two mates –two people perfect for you- and with all certainty, every fiber of his being assured him that he was holding his mate in his arms at this very moment.
He looked down at Ella. She appeared so young; he wondered how old she was. He knew nothing about her and still his heart beat only for her now. Her pale skin was soft under his calloused fingers. He longed to stroke his fingers through her short blond hair but didn’t want to disturb her. She remained limp and still but he took solace in knowing she was calmer now. Her cinnamon brown eyes were closed again. He’d nearly broken down when those precious eyes looked up at him, first afraid and then hopeful. They’d been filled with hope, with such faith and a trust he didn’t deserve.
His gut clenched with the knowledge that he’d claimed this magnificent woman without her consent. Would she understand he had no choice? She was so weak and seemed so vulnerable. He’d held her the entire flight back to the United States, hadn’t let anyone so much as touch her. When Donovan, the TEU’s medic, tried to help, Lucas fought back his growls while he refused his help.
“She needs more blood,” Donovan explained. “I can hear her heartbeat fading again.”
Lucas heard his brother-in-arms but couldn’t reconcile himself to what needed to be done.
“Lucas, listen to me,” Donovan raised his voice as he touched Lucas’s shoulder. “Since she’s a woman of the Magdalena Circle, our blood can sustain her through her injuries. I gave her a few drops of my blood while we were being held. Let me give her a few more.”
“No,” Lucas raised his voice to match Donovan and showed his sharp teeth, two actions he’d never before taken against one of his brothers-in-arms. Shame immediately rushed through him. “I apologize, Van, but no more. She will take from me alone.” Lucas knew the few drops Van had given her wouldn’t do any harm.
Since he wasn’t her natural mate, it had no effect aside from sustaining her health during her healing but he still couldn’t allow it.
Understanding swept over Donovan as he backed away and nodded. “You’ll need to at least give her a few drops until she’s well enough to feed fully.” Donovan pulled the curtain and left them alone.
Silence reigned over them as Lucas sat holding his mate, holding his hope in the future.